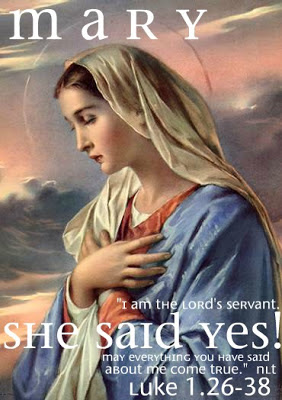 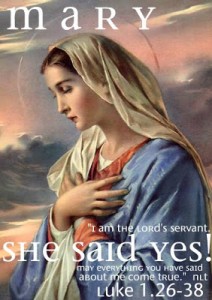 Did you notice it? As I was reading the gospel story this morning, did sense it?

As Gabriel was talking to Mary did you see them?

Did you see all the other angels and the heavenly hosts watching in eager anticipation? Did you notice how they held their breath as Mary asked her questions and Gabriel answered? Did you hear them when Mary said those words, “I am the Lord’s servant. May your word to me be fulfilled” as they all let out a collective sigh of relief.

She had said yes.

Mary said yes to God’s plan for her life. A plan that would see her become the mother of the Messiah. Her son, whom she was to name Jesus would be the Son of the Most High, he would receive the throne of David, he would reign forever and his kingdom would never end!

If you are looking for a miracle today, then I would suggest to you that you have found it. Presented with God’s plan for her life, a plan that might result in her being ridiculed and become a social outcast, Mary said yes.

She asked her questions. Questions that might be read as doubt or perhaps simply as inquiry. How can this be, how can I have a child as I am a virgin. In the Greek Mary literally says, I have not known a man. Mary heard God’s call in her life and she answered.

Now let me tell you something about God’s call in life. It took me close to twenty years to get to where God was calling me. Once I realized ministry was something I could actually do and set my heart and mind towards becoming a minister it took me fully ten years to complete.

Most people when they hear God calling they run.

That’s what Jonah did. God asked Jonah to visit Nineveh and Jonah was so dead set against going there that he ends up in the belly of a whale.

Sarah laughed when she heard God’s plan for her life. That she and Abraham would have a son. She laughed at God and said it wouldn’t happen. When she finally did have a son, as God promised, she named him Isaac which means laughter.

Moses originally said no to God. I’m not sure if that part made it into the new movie that was released.

But not Mary. Mary says yes. I am the Lord’s servant, may your word to me be fulfilled.

If you are sitting here today and if you are operating under the belief that living a quite unassuming life isolates you from the extraordinary you are incorrect. If you think that God works through people we have all heard of such as Martin Luther King, Billy Graham, Bonhoeffer, the Pope, or Bono let me disabuse you of that notion. Our gospel lesson this morning is evidence that God does not call us based on where we live, based on our popularity, our brain power or our access to monetary wealth.

If we learn anything from this lesson today it is that God’s call comes from unexpected places, it opens up the unimaginable and makes all things possible.

Friends, advent is a time of preparation. Today we are asked to look at this young woman and in calling Mary a young woman I am being very generous. Mary was a girl, probably no older than fourteen. She was unwed, having only recently been betrothed to Joseph a carpenter. She was we can surmise faithful to Jewish teaching. We know that she was highly favoured by God as Gabriel tells her this twice.

So if Advent is a time of preparation and we look at Mary is it fair to say she was prepared?

Just think about what you go through in getting prepared for anything. Take the choir as an example, each week the choir meets on a Thursday night and they rehearse the anthem and go over the hymns. Last week the choir offered up the cantata during worship. They had been rehearsing that cantata since Thanksgiving.

Before we begin a new ministry we want to make sure it is viable. That we are prepared. We form a committee and we plan. In her book This Odd and Wondrous Calling Lilian Daniel talks about sitting in a church committee meeting. The committee is planning the meal for the local soup kitchen that the congregation participates in twice a year. She writes that forty-five minutes into the meeting and we are still debating which chilli recipe to use. We almost make preparing the a new ministry the new ministry.

Friends what can we learn from Mary in this story? We can learn that she was not prepared for the dramatic change that her life was about to undergo. Nothing in her experience could have prepared her for that. Mary was not prepared, except for one thing. Mary was prepared to say yes to God’s call in her life.

When God asked her to conceive and give birth to a son, Mary said yes. She recognized that it was not about her, but about God and asked that God’s word be fulfilled.

As Protestants we don’t talk about Mary very much. In fact this may be the only Sunday all year that I will mention her in a sermon. However, I think there is a great deal we can learn from Mary and apply to our own lives.

As I was preparing for today I came across the song Let it Be by the Beatles and though I recognize that Paul McCartney was probably not writing about Mary the Mother of Jesus, given that his mother’s name was Mary, some of what is found in this song is helpful in gaining insight into Mary’s character and what it means to say yes to God.

When I find myself in times of trouble, Mother Mary comes to me;
Speaking words of wisdom, let it be.

And in my hour of darkness she is standing right in front of me;
Speaking words of wisdom, let it be.

And when the broken hearted people living in the world agree;
There will be an answer, let it be.

And when the night is cloudy there is still a light that shines on me;
Shine until tomorrow, let it be.

A wonderful, yet perhaps unintentional, paraphrase of what Mary’s response means.

In times of trouble, trust in God’s promise for your life.

In times of darkness, trust in God’s promise for your life.

Let the light and the love of Advent rule in your life. If the season of Advent is about preparing for the birth of Christ, then remember this. The only prerequisite to receiving Jesus, the only qualification to welcoming the birth of our saviour Jesus Christ, the Prince of Peace, Emmanuel, God with Us is this: