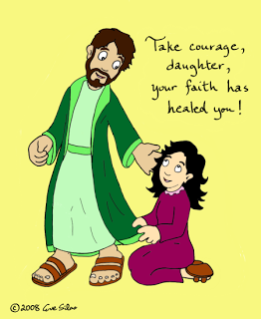 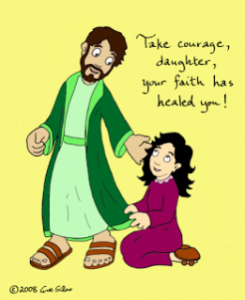 There is something to be said for personal space. The piece of real estate that you keep to yourself, an area that you guard and don’t allow anyone else into. It’s a comfort zone, we feel a little safer, a little more secure.

When we enter into a crowd we find that our personal space begins to dissolve. It just fades away and we have to contend with bumping into those who are around us. It can be an unsettling feeling.

For most of us when we are in a crowd it is because we a leaving a sporting event or as we exit the movie theatre. For celebrities and politicians crowds often form around them. In these instances the crowd does an interesting thing, they all want to touch the individual who has captured their attention. Personal issues of space are forgotten in a desire to reach out and touch that one individual. In the process we violate their personal space.

This is the scene that we find Jesus in from our gospel story from Mark. The crowds have surrounded him. The disciples are acting more like security guards in vain attempt to keep the crowd back from Jesus. It’s no use the people who have gathered are reaching out and touching Jesus. He is being bumped from left and right.

In the midst of all this is one woman in the crowd. A woman who if she is discovered could find her life forfeit. Yet, there she is with the rock solid belief that if she can touch Jesus she will be healed. So she wades through the crowd, reaches out and touches the cloak that Jesus was wearing.

Who touched me is the response we get from Jesus. Who touched me? An odd question when everyone around you is touching you. Which is exactly how the disciples respond. Those disciples who so often were clueless about what Jesus was teaching and doing finally get one right. Everyone is touching Jesus.

Who touched me? What an outrageous thing to say while in a crowd.

Of course, Jesus knows who he is referring to. Jesus knows that power went out of him when the woman touched his clothing. Jesus’ question is largely rhetorical. However, only he and the woman know that. What of that woman, what makes her special in this story. Beyond the healing that is. There is a lot at play here that is lost to us as modern readers of this story.

Let’s take a look at this woman and in doing so we will gain some perspective on just how much Jesus was willing to turn the world on its head.

What we know about the woman is that she has been subject to bleeding for twelve years. She’s exhausted her resources looking for a cure from doctors. Upon hearing about Jesus she thinks, surely this man can heal me. If I can but touch his cloak I will be healed. So she fights that day with the crowd to get close enough to touch Jesus, believing that she will be healed. And she was. The text says immediately her bleeding stopped and she was freed from her suffering.

If we do some research we learn some additional information about this woman, which the story does not explicitly tell us. However, it is information that those who heard the story for the first time would have been aware of. This woman belonged to the lowest level of society. Perhaps not originally, but because of the bleeding she would have been considered an outcast. She was considered ritually unclean because of her bleeding.

Simply touching this woman would make you or I also ritually unclean. Commentator Scott Hoezee explains it this way, “This woman had a “female problem” and according to ancient law, it made her an outcast. For the good of all, she needed to remain far away from other people because so long as her problem persisted, she carried the contagion of unholiness. Touch this woman or be touched by her, and you couldn’t go to God’s Temple for a week. In other words, if it becomes known that she was putting the community at risk, she could be stoned to death. She’s been socially dead for a dozen years now and although people might feel bad about that, there wasn’t anything they could do about it. But if she could not quietly accept her socially mortified status, the community would have no choice but to remove her forcibly before she did more damage.”

Because of the bleeding this woman was socially dead. An absolute outcast and exile. Make no mistake that on that day she touched many other people while she was in that crowd. However, such was her belief in Jesus that she was willing to risk death.

I believe that this woman and Jesus’ response to the situation is very informative. We have much to learn here.

We can learn from her faith, faith that believed Jesus had the power to cure, the power to heal. What hurts exist in our communities, within our own contexts that Jesus’ healing power could be applied? Do we believe that the healing is possible, do we have that faith?

We can look at the bravery of this woman. First she was a woman and she wanted to touch a man to whom she wasn’t married. Within the context of society this was something that wasn’t done, worse she had a medical condition that made her ritually unclean. And she wanted to touch Jesus, believing she would be healed. The faith and the bravery of this woman, the conviction of her beliefs to go against the grain of everything that society is telling her is correct.

And what part does Jesus play in this drama? Jesus realized at once that the power had gone out of him. All those hands touching him and he’s aware of the power going out, he’s aware of this woman’s faith. He’s intimately connected to his surroundings, to his context.

The woman comes forward of her own volition, with fear and trembling. She knows she has been healed, but still with fear and trembling for what she does next. She falls at Jesus’ feet and tells him the whole truth. She tells him about her condition, about how that would make her ritually unclean, how she entered the crowd touching many people and finally about how she was healed. In short, her truth telling is enough to incriminate her. Yet, she responds openly and honestly.

The woman told Jesus the whole truth. Jesus already knew what had happened, however the woman doesn’t seek to hide anything. There is no shame in her telling the truth. How often is the truth viewed as an inconvenience, as something to be avoided? How often do we tell a little white lie to avoid trouble? Here we witness a woman telling the truth and risking her own death in doing so.

That is faith. That is trusting in the goodness of God. I would argue that the telling of the truth is the true act of faith that Jesus refers to. Not her faith that Jesus could heal her, but her faith that in Jesus she could be open and honest. It is a reminder that Jesus came not to judge, but to save. To heal us and to offer God’s grace to us. In Christ we have nothing to fear. Not the truth, not our problems.

Now you can imagine that the crowd is not too pleased by what they have heard. Though Mark in his writing does not deal with the crowd after this fact, they are still there. I can imagine they are not too happy to learn how they have been touched. How they have had their personal space violated and that it has resulted in them being ritually unclean.

However, before they can rise up against this woman Jesus does a remarkable thing. He calls her daughter and sends her off with a benediction. Go in peace he tells her.

No one pays any attention to the woman, she is just an anonymous face in the crowd. Only Jairus is concerned about his daughter. If she matters at all it is because her father is important. I do not say these things to be callous, in fact just the opposite. Why do these two women matter?

How does this story inform our living? Do we have the faith of this woman? Can we trust enough to be open and honest? Do we follow in the example of Jesus and see the worth and value of all people? This is a story about far more than just healing, it is also a story about acceptance and community.

It is my prayer that we as a community of faith can continue to share the truth we know about Jesus and in doing so we can ensure that our doors are always open to all people. Amen.