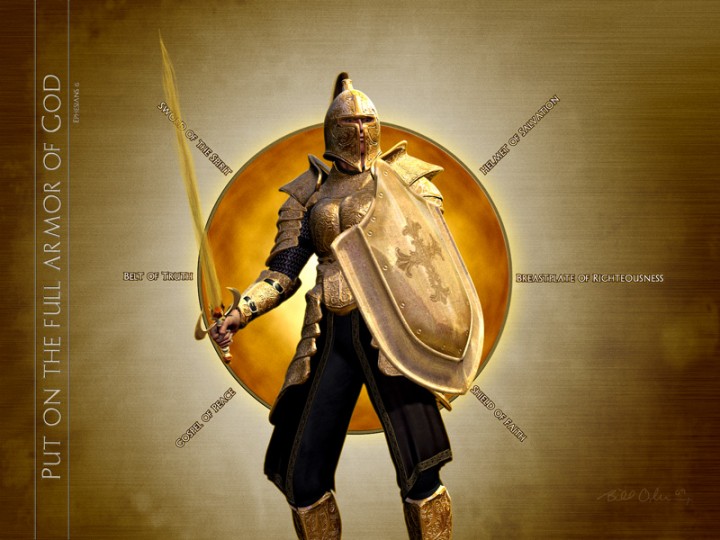 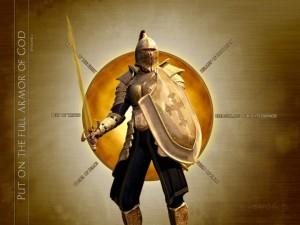 What does  it mean to put on the whole Armour of God? Should Christians today be adopting an image that promotes violence and warfare? Let’s take a look at Paul’s letter to the Ephesians and try to gain a better sense of what it means to wear the Armour of God.

You may find the Primer for Sunday: Stand Fast helpful reading before you start the sermon.

The Armour of God

Our passage from Paul’s letter to the community in Ephesus this morning is one that has a hint of militancy in it. The idea of wearing the armour of God invokes images of war, conflict and violence. Indeed this passage has been used to provide support for soldiers.

This passage has been read with a sense of militancy and aggression in the past. It does contain images which we associate with warfare. As a result this passage is often jarring to our modern understanding of what being a Christian is. We do not think of Christians as being war like, though we might confess that there are times in which we should stand up and defend ourselves.

During World War II the WMS provided annual donations to the Chaplaincy Committee of the Presbyterian Church in Canada to print a booklet entitled “The Armour of God: A Pocket Companion for Canadian Presbyterians in His Majesty’s Forces”. This booklet was carried by chaplains and given to soldiers in the field. One of the first pages of the booklet the passage we read this morning appeared.

The booklet used this passage to encourage soldiers fighting in World War II. It is a fascinating little book that provides great insight into how our passage this morning has been read and in some cases continues to be read.

Others read this passage with its references to the Devil and other powers as a reminder that we are indeed locked into an eternal struggle. We are at war, right at this present moment with the Devil and sin. A cosmic battle taking place beyond our sight, yet within our control. Hollywood likes this image a lot and has made a lot of movies depicting angelic and demonic forces waging war while humans scramble around trying to pick up the pieces.

These two interpretations, both which have an air of militancy, aggression and violence about them require us to look hard at this passage and ask what is going on. What is Paul writing about and do I really need to be a soldier? Important questions when we remember that we serve and follow Jesus, the Prince of Peace, the Lord of Life. The same Jesus who said, “Turn the other cheek.” So why is Paul telling this community in Ephesus to put on a suit of armour?

Paul is writing to the church community in Ephesus from a jail cell. Paul tells us this in the last verse of this passage when he writes, “… though now I am in prison.” Some translations make this more poetic by writing “… for which I am an ambassador in chains.” While in prison Paul would have likely been confronted by the image of a Roman soldier on a daily basis and so he subverts the armour and weapons. His message is actually very counter-cultural. The early followers of Christ were pacifists, which again is counter to the aggressive position of the Roman Empire. A position held in place by the Pax Romana, the Peace of Rome, which was enforced by Roman soldiers. Using the image of a Roman Soldier subverts its power.

Now that we know where Paul was when he was writing the letter, let’s look at the community in Ephesus. First, let’s remember that being a follower of Christ was illegal in the Roman Empire. Christianity has not yet been recognized by the Roman Empire, that wouldn’t happen until the year 313. Paul is writing this letter around the year 60.

This letter of Paul’s does not name any particular persecution that Christians were facing, we do know that daily harassment and discrimination was occurring. Remember Paul himself is in prison because he is a Christian. The religion of the day was that of the Cult of the Emperor. The belief was that when a Roman Emperor died, they were deified. Around the time that Paul was writing his letter a new temple was constructed in Ephesus to the Emperor Domitian. It is possible that these new Christians were taken to the temple and asked to worship the Emperor Domitian.

Additionally, Ephesus was a thriving commercial hub in the Greco-Roman world. It would take time for these new converts to Christianity to release themselves of the Greco-Roman-Platonic cosmology that they understood. Paul was writing to them to stand fast to their belief in Christ and to battle against the other forces around them. Both temporal and cosmic.

We now have better insight into why Paul is writing to the community in Ephesus. Why he co-opted and subverted the image of the Roman Soldier.

The question we have before us, is what are the rulers, authorities and cosmic powers of our dark age?

There are many and they are varied. To be short, it is anything that is pulling us away from our relationship with God. Anything that demands that we worship it, instead of God. It is those powers and people which say personal wealth is more important than your neighbour’s welfare.

In other words it is much of what we face and experience during our day to day lives. What we watch on TV, how the news media shapes our views, how politicians prey on fear. Business which put profit before sustainability.

Which makes it sounds like there really is a battle to be fought and won doesn’t it? We have heard God’s promise to us in Jesus Christ. Our job is to hear what Paul is saying to us about the struggle. Paul tells us repeatedly in this passage to ‘stand fast.’ For we know what we are up against and we need to stand up when we witness injustices and we need to speak out about it.

Friends, this is a passage about dependence on God. Standing strong with God even when the world abandons us and God.

The Good News we find is a case of already/not yet. Already we have triumphed in Christ, but we are not yet beyond the battle. We wrestle with rulers, authorities and cosmic powers in the confidence of Christ’s triumph.

Paul asks us to stand firm, however he is not asking us to dogmatically hold to a particular position. Instead Paul asks that we stand for something that is not transient, something which is transcendent and renewing. Paul is not asking us to get stuck on an issue or rigidly defend one position. In this part of his letter Paul is not saying one theology or belief is better or more correct. What Paul is interested in is the larger picture of God’s grace and mercy.

Yet, friends we hold Christ’s ground because the victory has already been won. Amen.