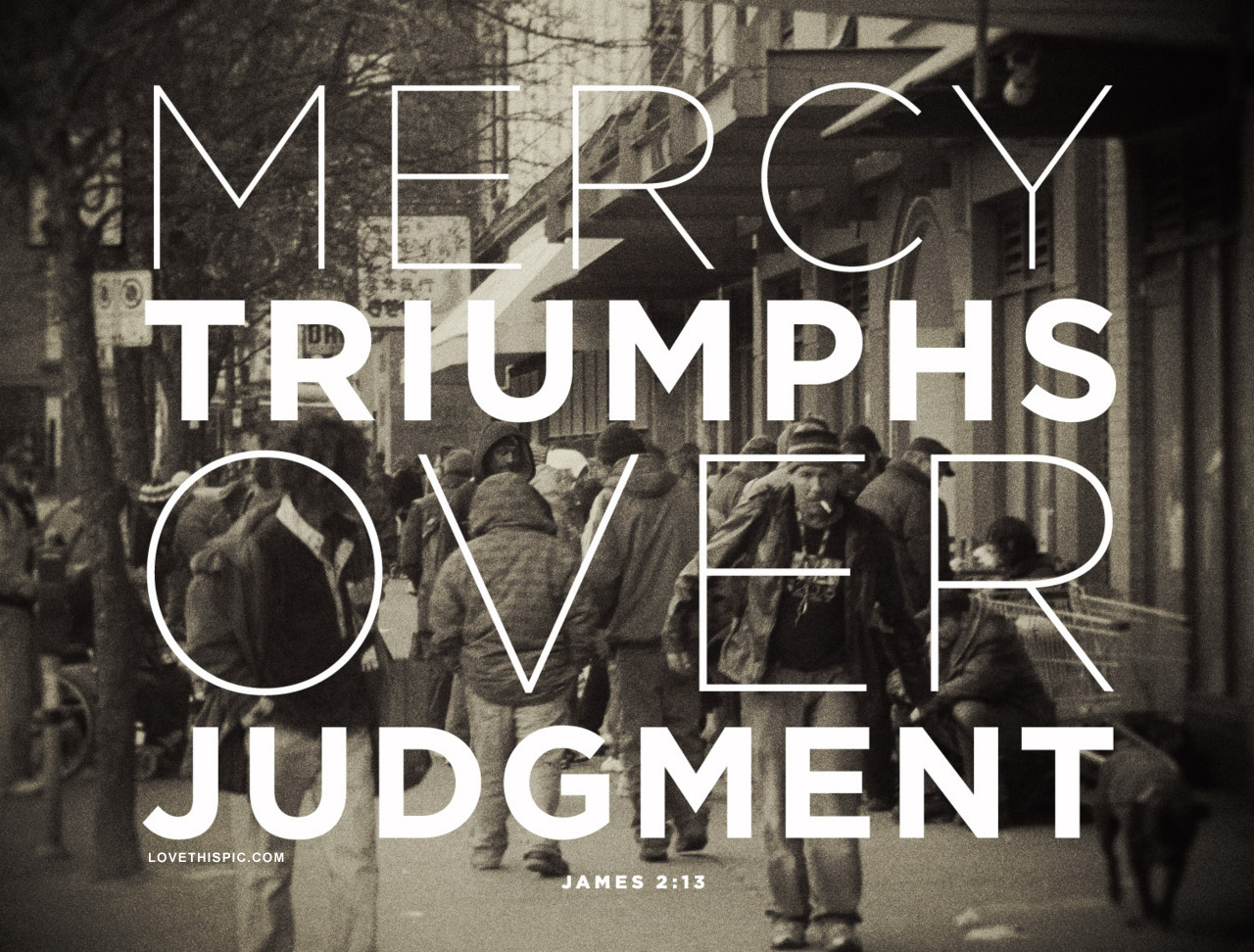 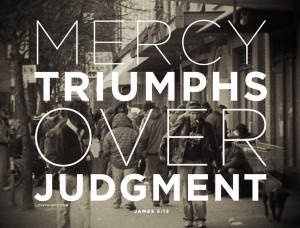 Today we continue our study of James. Our passage this morning deals with the distinctions we make between ourselves, the judgements that may occur as a result and finally with how James urges us to respond. You may find it helpful to read the article Who Gets to Judge before reading the sermon.

As we continue to study James this morning I want to start in the middle of our passage. There is a lot going on in our reading today and we will dig into it. However, the following verse helps to frame what is occurring in the passage.

“Speak and act as those who are going to be judged by the law that gives freedom, because judgment without mercy will be shown to anyone who has not been merciful. Mercy triumphs over judgment.”

Let that verse sink in. It is central to our passage in James today, indeed it is a central theme to all of scripture.

The Good News translation which we read this morning talks about how we make distinctions between ourselves. The NIV calls these distinctions discrimination. How are the ways that we created distinctions amongst ourselves?

Consider this, a recent issue of The Wall Street Journal showed the cultural relevance of these words of James. It explored the changing ways in which our culture defines objectionable language. A hundred or so years ago, it was religiously inappropriate language that was condemned. Taking God’s name in vain was forbidden. Now every other sentence is prefaced with “Oh my God.” More recently, it was sexually inappropriate language that became the taboo du jour. There were certain sexual words you just couldn’t say in public. Now the F-bomb is dropped in polite company and cable TV all the time. Today the worst words are those that express discrimination of any kind. The worst cultural sin is not to be sacrilegious or scatological, but to speak in a derogatory manner about another race or gender or sexual orientation. Intolerance and discrimination are frowned upon more than anything else. Perhaps society has finally caught up with James. (Reference).

James is addressing an issue that has become apparent in the early church. The class distinction that was being made between rich and poor Christians. What is clear is that when we look at the teaching of Jesus it is the poor who are favoured. What we should also realize is that we are all equal in the eyes of God.

Yet for all that we still assign worth to people based on the perception of class, race and sex. We do it as individuals and like it or not we do it in the church. For example the Presbyterian Church in Canada started ordaining women in the 1960’s, a bit late to the party but not as late as the many denominations who still do not allow women to be ordained. Including our sister denomination the Presbyterian Church in Mexico. One example of discrimination based on sex.

Years ago a friend of mine went to buy a ring for his girlfriend. I think it was around Valentines. He went into a Birk’s store. He was wearing dirty ripped jeans, a t-shirt from a concert he had attended a few years ago. He had long hair pulled into a pony-tail and I doubt he had bother to shave that day. The staff in that store didn’t even look up when he entered. He spent 10 minutes in the store and no one bothered to ask if they could help him. He was the only customer in the store. He left, went to another jewelry store and spent the $3000 that was in his pocket there.

The staff had assumed that a young man dressed in this way couldn’t afford anything they sold. Or perhaps that he wasn’t the type of customer that they wanted. They had looked at his physical appearance and his age and had dismissed him. How often do we make similar judgments at the church?

What is fascinating about this passage is that James does not focus on societal causes or political cures. James focuses on what the church must do when income inequality comes through the front door of the church. That’s James’ focus, income equality, rich and poor. From there we can draw out and see how other distinctions are made to divide us. Young and old, men and women, some may even carve out distinctions based on perceived piety. There is a word we don’t use much anymore, but I would wager there are Christians who don’t think other Christians are faithful enough or devoted enough in their personal lives.

Friends our passage this morning can push and pull us in many directions. One of the things it might move us to think on is how we serve those who have less. How we run a soup kitchen at this church and the other ways that we do outreach. All good things, but what is critically important is how we think about and treat the individuals who come to those services.

We need to hold in careful balance the mandate of Jesus to feed the hungry and clothe the naked alongside what James is writing about in drawing up distinctions between how those very people we serve are treated. Do you see the distinction I am trying to make there?

Yes, we need to serve people but in doing so we need to respect their humanity and treat them just like someone who doesn’t need the service we are offering.

It’s not our job to judge people or their circumstances. Mercy trumps judgement. Our job is to extend the grace of God.

What this passage also does is speak profoundly to how we greet new people in the church. Pastor Stan Mast shares a powerful illustration about this passage. Mast spent 22 years as the minister of a downtown church. A church surrounded by homeless people. The church did its best to minister to this individuals and invited them into worship.

One Sunday one of these individuals approached the front of the church and tried to mount the pulpit. I imagine it was a pulpit you had to climb a set of stairs to get into. Two ushers grabbed the individual and pulled him back. The congregation was deeply upset about how the situation was handled as they were aware of this passage. The ushers should have done a better job in dealing with that poor man.

Then a few months ago a visitor to a church in the Southern States shot and killed the pastor and a number of others after a wonderful time of Bible study. Mast writes, “All of which illustrates how difficult it is to be consistent Christians in a complicated and dangerous world. It will take all the faith and love we have. No, it will take Jesus living in and through us.” (Reference).

Friends, how often do we discriminate based on the perception of class, race and sex? I assure you it happens far more often than any of us is comfortable with admitting or talking about. On one hand perhaps we are right to make judgements, to take precautions.

On the other hand we are called to love people. To welcome them, to extend grace and mercy to them. Mercy triumphs over judgement.

Friends I want to share with you a fundamental truth. The day after I wrote this sermon I woke up and the world changed. The world woke to an image which is imprinted on my mind. The image of a three year old child face down in the sand. A refugee who did not make the harrowing crossing from Turkey to Greece.

But let’s be clear, Syria has been in a state of civil war for over three years. The advance of ISIS has compounded the problem, but there have been refugee’s fleeing from this and other areas of the world for years.

However, now it is in our face. It is front and center and it requires our attention. It always has required our attention, but now that it is there hanging like a specter before us I ask you what are we to do about this? Do we simply pray for an end to the conflict? That would be a start, but it would not be the place to end.

What is our passage in James saying to us? James says offer the same hand of fellowship to whoever you meet. Extend grace and mercy to all people.

Our passage this morning ends with James sharing some hard words about faith. James writes, “What good is it, my brothers and sister, if someone claims to have faith but has no deeds? Can such a faith save them … Faith by itself, if it is not accompanied by action, is dead.”

Friends, the message becomes clear. Do not judge, instead offer grace and mercy. In doing so you will be compelled to action and your faith in God will swell. May we also respond with action which is worthy of our God. Amen.