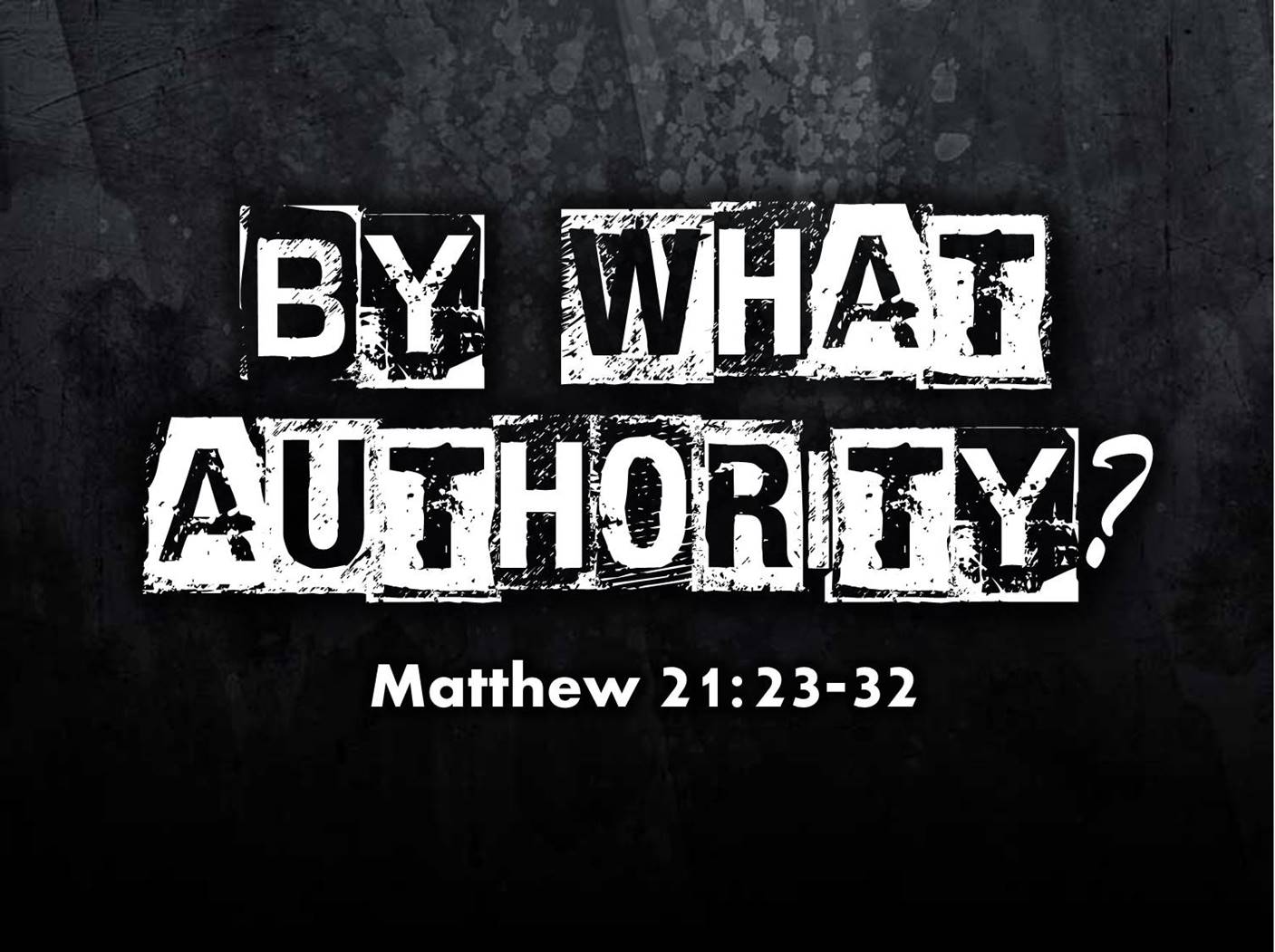 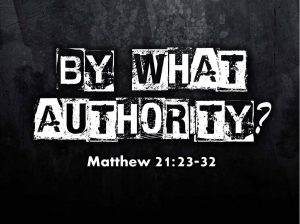 The question regarding the authority of Jesus has as much to do with the answer as it does with the reasons to ask the question. His authority comes from heaven, this is clear to us as modern readers and it was clear to the chief priests and elders even if they didn’t want to admit it.

Perhaps you’ve been asked the question if there was anyone, living or dead, that you could sit down with and share a meal or ask some questions who would it be? I imagine that each of us might have an individual that we would love to ask questions, to find out what is on their mind.

Commentator Charles Campbell notes that he was watching television one time and Dr. Phil was on. Dr. Phil was asked that same question, “If you could interview anyone who would it be?” Dr. Phil responded that he would like to interview Jesus Christ, his response came without hesitation.

Campbell notes that as soon as he heard Dr. Phil speak these words he thought, “Oh no, you wouldn’t. You would not want to sit down with Jesus and treat him like an interviewee, and ask him about the meaning of life. You would be crazy to do that. He would turn you upside down and inside out. He would confound all your questions and probably end up telling you to sell everything that you own, give the money to the poor, and come, follow me. No Dr. Phil, you do not really want to interview Jesus, and I do not want to either. It would not go well” (Feasting on the Word, Year A, Vol. 4).

Jesus is asked a very simple question by the chief priests and elders. “By whose authority do you do these things?” Those priests and elders would quickly realize that conversations with Jesus are dangerous and that they often have life changing outcomes. It is important to understand the context of why this question is asked in the first place.

This passage takes place in the temple, in this passage Jesus has already made the triumphal entry into Jerusalem. The location of the story is important in understanding its context and adds a layer of meaning. During this parable, Jesus, the son of God, the Messiah is standing in the one place where God’s authority is observed as being greatest.

The question the chief priests ask Jesus is reasonable enough, “By whose authority do you do these things?” Let’s remember that the day before Jesus showed up at the temple and starting flipping tables and chasing the money changers out of the church. Let’s remember that those priests had authority that has been given to them by God in the time of Moses. They are the keepers of the temple and they are rightly concerned about what has happened and within their rights to ask the question they do.

We as readers of the story are privileged to know certain details that those chief priests did not, namely that Jesus is the son of God, the Messiah. And so they question Jesus and the question they ask about authority is a question which the response will determine life and death.

If Jesus were to lose this challenge, his occupation of the temple would cease, his challenge to the authorities in Jerusalem would end, and the leaders would regain control of the temple. If the high priests win in the asking of this question, there is no need to crucify him. Except they don’t win, they admit defeat because Jesus confounds them.

The question asked of Jesus aren’t about ascertaining his true identity, they are about maintaining the power and privilege of the chief priests and elders. And with one counter question Jesus throws all of their assumptions aside.

The debate of the chief priests demonstrates that the concern they had was what will happen to us if we get this wrong? They were worried about their privilege and control, they were worried about their social standing within the community. When Jesus asks them to answer if the baptism from John came from heaven or from human origins he puts the priests in a tight spot.

They can’t say from heaven because they branded him an outcast, as a fringe prophet raving away in the wilderness. They didn’t believe in what John was preaching. If they admit what they want, that John’s baptism came from human origins then they know that they will anger the people who viewed John as a prophet. So they cave and you have to imagine that it is under their breath that they mutter, “We don’t know.”

Really, I think they did know, but they were too proud to admit it. They weren’t willing to take the fall and lose their own power and authority. Jesus asks the question knowing full well that the answer to both questions was the same. Neither John nor Jesus had any human authority. Neither had gone to seminary, neither had been licensed or ordained. If either John or Jesus had any true authority to claim, it had to be from God directly (reference – Calvin Center for Excellence in Preaching).

Then Jesus doubles down and tells the parable of the two sons, one who says he won’t work but later does it anyway. The other who says he will, but then reneges and doesn’t go. Who, Jesus asks, did the will of his father?

The first one comes the response. And who does the first one represent, the sinners, the tax collectors, the prostitutes, all those who at first ignored God’s call in their lives. But when they heard this preacher in the wilderness named John, they turned and repented. They did the will of the Father. Jesus equates the chief priests to the second son. And in doing so plants the seeds which will lead to the temple authorities having him arrested and killed.

Commentator Charlotte Cleghorn writes, “It is easy for us to judge the chief priests and elders, because we already know the story and so can point our fingers at them. As is often said, however, when we point one finger at another person, there are three pointing back at us. What if we were to put ourselves in the shoes of the chief priests and elders? What if we were to ask about our own tendency to want to keep things as they are, to maintain the status quo? What if we were to ask ourselves about our own resistance to change, to being transformed? What is Jesus asking of us as we so easily ridicule these keepers of the religious establishment?”

This is not a passage where we get to sit smugly and cheer on Jesus. We don’t get to stand on the sidelines and watch the events unfold. This passage asks us to look at ourselves in the light of the chief priests and elders. To ask ourselves in what ways is God speaking to us today and are we ignoring God because it’s more comfortable for to ignore god? In what ways might our lives be transformed if we opened ourselves up to God’s change? How is God’s message and the work of the kingdom being hindered because we might be stuck in a rut? What are we afraid of losing if we admit the truth that may be before us?

There is something important about changing minds and coming to God. What do we learn from the tax collectors and prostitutes who believed verses the chief priests and elders who did not?

I think British theologian NT Wright puts it best, “the challenge of this passage for us today is partly this: to make sure we are responding to Jesus, allowing him to confront us at any point where we have been like the second son and say ‘yes’ to God while in fact going off in the other direction. That’s important, but it’s not the only important thing. What we should also be asking is this. What should Jesus’ followers be doing today that would challenge the powers of the present world with the news that he is indeed its rightful Lord?” (Matthew for Everyone Part 2).

We have a role to play in the unfolding of the kingdom. I pray that as you move through this week and the coming year that you be mindful of this and keep it in prayer. Amen.