No Good Can Come From Nazareth 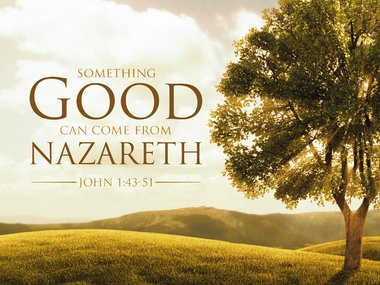 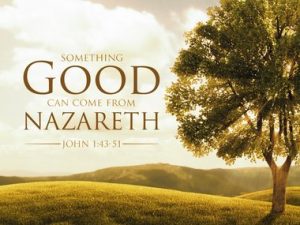 Can good come from small, insignificant places? This is the central question of our text from John’s gospel. The question is asked by Nathaniel, who shortly after asking would confess Jesus as, ‘rabbi, Son of God, King of Israel.’ Nathaniel would learn that yes, something good can come from Nazareth, something good can come from small insignificant places. This is powerful testimony that God is at work in all places and through all people. Even people from cities or nations that others might classify as undesirable. We remember that God created all things and named them good.

No Good Can Come From Nazareth

Have you ever watched two sports fans, who like different teams, debate the merits of why their team is the better one? All sorts of information will be produced, some of it will be based on statistical data, winning records, most championships won. Other arguments will be purely emotional.

As I’m from Toronto I’m a nominal fan of all teams Toronto: The Leaf’s, Jays, Raptors, Argos, the Rock, TSC and the Wolfpack. It doesn’t mean I necessarily watch or even like the sport, but I support my home team. If we talk about hockey there is a historic rivalry between Toronto and Montreal. Now, we also have the battle for Ontario with Toronto and Ottawa. And we can have friendly jabs at one another based on the outcome of a game. Of course, Toronto lost the other day to Ottawa so I need to be able to take a few jabs.

When I discovered the NFL I became a Pittsburgh Steelers fan. Why? Because in the third grade I had a friend move to Pittsburgh. That’s it, that’s the only reason. I nominally adopted that team as my home team because a friend moved there.

We also see it with consumer brands. Coke vs. Pepsi, Pc vs. Mac, which now might be termed as Android vs. Apple. Do you drive a Ford or a Chevy. A cousin of mine had a shirt which read, “I’d rather push a Chevy than drive a Ford.” I’m sure a shirt exists where those two brands are inter-changed.

We might see other loyalties play out based on where we live or where we went to school. I believe at one time in Cobourg students at the West might have said something along the lines of, “The West is the best, the East is the least.”

The same thing is at play here in our passage from John. Nathaniel when first hearing about Jesus being the Messiah very mater-of-factly asks, “Can anything good come out of Nazareth?”

Nathaniel was from Cana, a neighbouring and rival village. He held a low opinion of Nazareth which is very evident by the question he asks. If we look at scripture we might conclude that Nathaniel is right to think this way. Do you know how many times Nazareth was mentioned in the Old Testament?

Zero. It doesn’t show up anywhere. So here is Jesus, son of Joseph from Nazareth and Nathaniel is clearly unimpressed. And here is where something else which doesn’t seem to appear in the bible very much shows up: humour.

I don’t know about you but given all the genres of writing that are contained in scripture, there is very little humour. However, I think that in this passage John was using humour to convey a point.

Nathaniel has just asked the question, “Can anything good come from Nazareth?” To which Philip says, “Come and see.” So, Nathaniel goes with him and what does Jesus say as Nathaniel approaches, “Here is truly an Israelite in who there is no deceit!”

Is Jesus agreeing with Nathaniel, that nothing good can come out of Nazareth? Other translations render the word deceit as guile, which is sly or cunning intelligence.

I believe we can take a little chuckle here at the way Jesus addresses Nathaniel. That with this comment which we might laugh at, Jesus is offering a backhanded compliment. This compliment is understood through two things that Jesus says to Nathaniel.

The first is that Jesus addresses him as an Israelite. The second comes after Nathaniel’s gushing confession when Jesus says, “you will see heaven open and God’s angels going up and coming down…”

Who was the last character in scripture that you recall who saw heaven open up and angels going up and coming down? You need to stretch all the way back to Jacob. Jacob, the younger brother to Esau. Jacob who was a trickster. Jacob who lived a life of deceit and who was full of guile.

Jacob who wrestled an angel of God and then that night while resting dreamed of a celestial stairway, of angels coming and going. Jacob who saw God face to face and was renamed by God Israel.

Nathaniel’s initial suspicions are interesting and so is his comment about nothing good coming from Nazareth. Because they echo what the secular and religious powers of the day were saying. Nothing good is coming from this Jesus of Nazareth, he is threatening that power we enjoy. He is upsetting the balance of things by empowering the poor and healing the sick. Nothing good can come of this and so let us kill him.

Let’s be clear. I’ve chosen to see humour in the response that Jesus offers. However, this week the President of the USA is reported to have made a statement very similar to Nathaniel’s about people from other nation’s. Can anything good come, do we have to take them? And that question wasn’t really funny and it holds implications for people.

Nathaniel is there at the end, he bears witness to the risen Christ. He knows now that yes, something good can come from Nazareth. That Jesus of Nazareth, teacher, son of God, king of Israel, is the Messiah, the risen Lord. That the good that comes from Nazareth is meant for all people, in all times and all places.

And Nathaniel comes to faith because Jesus pokes a little fun at him. And humour, let’s be honest all humour is built on the pain of another. You laugh at someone else’s circumstances, you laugh at their expense. Jesus uses humour, uses Nathaniel’s bias and prejudices to peel back his eyes to a wider truth.
And we will all see much greater things than this! For we live for the day when we will see heaven open up and God’s angels going up and coming down on the Son of Man. Thanks be to God. Amen.