How did the church start?

Where did Jesus find the roots of his ministry?

What is the tradition that we continue in?

These are important questions that inform us about our faith. Often when we ask how the church started we will get a very academic answer born out of detailed study about church history. This answer is not wrong and is in fact something I studied a great deal of at seminary. We look at the structures and movements of the early church, what we sometimes fail to see is that the early followers of Jesus were part of a protest movement.

This week I’m happy to share the second Advent Living Room developed by our regional consultant Tori Smit. Click on the image below to discover more. 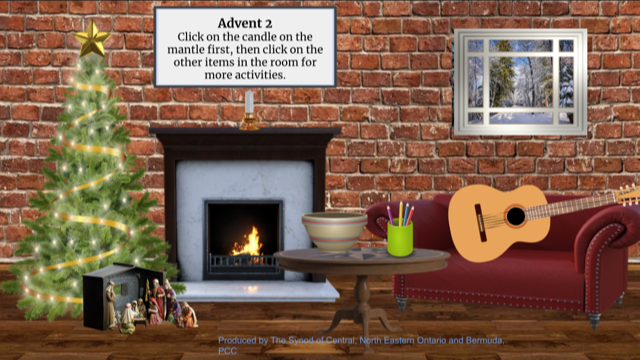 In his gospel account Mark skips all of the nativity scene depictions that we normally associate with Christmas. There are no angels, shepherds or wise men. An angel doesn’t visit Mary and Joseph to explain the holy mystery. Instead Jesus appears on the scene, not as a baby, but as a man about to begin his ministry. Mark begins his account by writing, “The beginning of the good news about Jesus the Messiah, the Son of God.” We might say, no the beginning of the gospel story is the nativity! But not for Mark, his gospel account begins here, in the desert with John the Baptist baptising Jesus.

In fact, Mark’s gospel account doesn’t even begin with Jesus, it begins with John. It seems there is always a beginning before the beginning. I want to tell you a story about Sarah K. Evans.

“Evans, known formerly as Private Evans, is now 91 years old, and reflects on the seemingly unremarkable event that has led to public recognition almost 70 years later. In 1952 Private Evans was on her way home from her first military assignment, when she refused to move to the back of the bus. Upon refusing, she was taken to jail and detained for 13 hours. Evans sued the Interstate Commerce Commission for discrimination. Despite a judicial victory in November of 1955, the ruling was not enforced until 1961.

“Meanwhile, in March of 1955, a young black teenager, Claudette Colvin, refused to give up her bus seat to a white person. Having been exposed to the actions of Sojourner Truth and Harriet Tubman, Colvin was emboldened to resist the injustice she experienced on the city bus. As a result, she was handcuffed and arrested. And like Evans, her story was hidden until recent years.

“Before there was a Rosa Parks, the Civil Rights icon attributed with prompting the Montgomery Bus Boycott of 1955, there was Sarah Evans and Claudette Colvin. These trailblazing young women set in motion that which would be later attributed to Parks. Their names are scarcely, if at all, associated with the Civil Rights Movement, yet their actions precipitated one of the most pivotal events of the time. Evans preceded Colvin who preceded Parks. Just as John preceded Jesus.” (Courtney Buggs)

I’ve borrowed this story about Evans, Colvin and Parks from Prof. Courtney Buggs and I’m thankful for the way she has framed these beginnings. Because she sets up the advent of Jesus within the protest movement that the ministry of Jesus was a part of. God didn’t send Jesus to earth because everything was going well. Jesus came to earth, to teach, heal and fulfill the law because things were going wrong. The ministry of Jesus is a protest against the powers of the day, it is a movement of the least of these. But before we can understand Jesus and what he did we have to look at those who came first.

John does something similar and when his cousin Jesus comes on the scene Jesus takes over the movement that John started.

I should also note before I continue, as it is mentioned in the text, that John was imprisoned and executed because of what he said. And was Jesus and many of the prophets were also vilified.

First were the prophets, then John, then Jesus and now us. There is always someone who comes before.

Writing about the origins of our faith Brian McLaren notes the following, “[Christianity] began as a revolutionary nonviolent movement promoting a new kind of aliveness on the margins of society. . . . It claimed that everyone, not just an elite few, had God-given gifts to use for the common good. It exposed a system based on domination, privilege, and violence and proclaimed in its place a vision of mutual service, mutual responsibility, and peaceable neighborliness. It put people above profit, and made the audacious claim that the Earth belonged not to rich tycoons or powerful politicians, but to the Creator who loves every sparrow in the trees and every wildflower in the field. It was a peace movement, a love movement, a joy movement, a justice movement, an integrity movement, an aliveness movement.” (Brian McLaren)

We find ourselves 2000 years removed from the time that Jesus walked the earth. Yet, many of the systems of oppression have survived, perhaps even thrived, over that time. Christianity was once a dominant religion, however it was a political act by a Roman Emperor who did that. In that political act the church, which had operated at the margins, which had protested against that very empire now suddenly found itself as the legitimate religion, no longer delegated to the sidelines but being provided with immense power and influence.

Today, in a post-Christendom world we need to ask what vestiges of the past do we hold on to? What parts of power and privilege do we cling to and are they worth clinging to? Jesus came to protest the plight of the poor, the abuse of the law and to demonstrate a better way to live and love one another. This is what Mark is telling us by attaching the ministry of Jesus to the ministry of John and the prophets who came before.

This life changing work existed outside the current structures of religion and politics, it finds its roots not in personal piety, but in protest, service and humility. As we reflect on the deep peace of Christ that we are blessed with, let’s remember with clarity the God we have chosen to believe in and follow. Amen.