What does it mean to die, only to be born again?

These two questions seem simple on the surface, but they have confounded Christians throughout the years. In scripture Nicodemus has a difficult time understanding what Jesus means by this. In our passage today, the concept of dying to save ourselves comes after Jesus provides a very painful rebuke to Peter.

Special thanks to the Kerr family, Brian MacInnes, Janet Leadbeater and Diana Carr for participating in today’s service.

The Annual Congregational Meeting is today. The meeting will begin at 11am, but you can joing the call at 10:30am to socialize and catch up. If you are unfamiliar with Zoom we recommend you join the call early as we will have limited capacity to help with any technology issues.

You can join the meeting using Zoom Video Conferencing. Zoom can be downloaded to your computer or phone. The link below will connect you to the meeting:

Similar to the Advent Living Rooms that were featured before Christmas, I am pleased to share with you the Lent Garden series. Each week during Lent you can visit the Garden and discover some of the deeper meaning and traditions about this season. 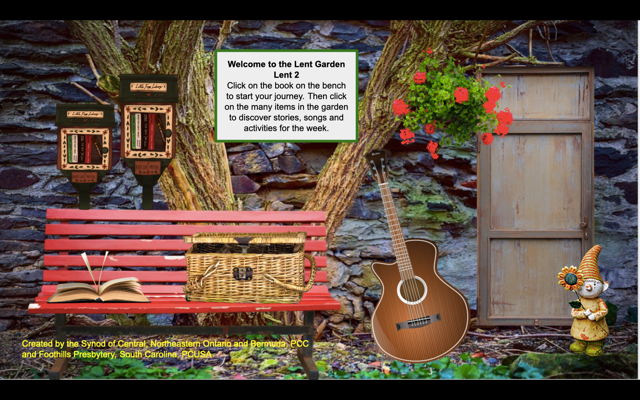 Have you ever had one of those days, where just when you think you have it all figured out you realize you don’t actually know anything at all? Maybe it’s a new hobby and you figure you have the hang of it but suddenly things don’t work as anticipated. Perhaps someone else comes along and does what you were trying to do in half the time with half the effort!

It happens to me all the time! I figure that puts me in good company because it happens to Peter constantly in the gospels. Every time Peter thinks he knows what is going on or understand what he needs to he discovers that he is woefully unprepared.

Let’s take a look at a few examples:

Then we get to our passage today. Once again, Peter is on point, he gets it! In the verses preceding what I read today Peter declares that Jesus is the Messiah! But in a few short sentences Peter fails to grasp what being the disciple means. Peter, and likely the other disciples, had one idea of what the Messiah should be, but this is not how Jesus understood it.

Peter has a tough time of it throughout the gospels.

But I think we can understand why, at least in our passage today, Peter has such a tough time. First he has an idea that the Messiah is supposed to be a temporal leader. Someone who will overthrow the Roman occupation and establish a new kingdom in the line of David. This comes out of the reality of being a subjugated people.

However, the other reason Peter rebukes Jesus and is then himself rebuked is probably much more understandable. Jesus was Peter’s friend and when Jesus says that the Son of Man must suffer, be rejected, and killed Peter doesn’t take it well. He doesn’t take it well because we are human and we don’t want life to end, which is why when Jesus predicts his death Peter tries to convince him otherwise. I think each of us can understand what motivates Peter here, I actually think Peter did the right thing talking to Jesus about this. It demonstrates his care for his friend.

What our passage illustrates for us is that we often have difficulty understanding and accepting God’s plan. We as people and a society are still rebelling against that plan, which is baffling really. Love one another, care for one another, make it your priority. If you take all the religious language out, that’s how simple it is. In religious language we say love God, love your neighbour. It’s really that simple.

In order for us to better understand what is going on here we need to turn to the Greek, because it provides additional emphasis that is lost to us in the English translation. In verses 35 & 36 of the NIV translation which I read we see the word life twice and the world soul twice. In Greek this is the same word, psyche and it can be translated as either life or soul.

Jesus uses this word four times in two sentences and that should tell us something. Jesus says to them, “Whoever wants to be my disciple must deny themselves and take up their cross and follow me. For whoever wants to save their life will lose it, but whoever loses their life for me and for the gospel will save it. What good is it for someone to gain the whole world, yet forfeit their soul? Or what can anyone give in exchange for their soul?”

On the surface that sentence seems damning. I don’t know about you, but I like life. I believe God is the creator of life and so reading a sentence from God’s son about picking up a cross and following him, well we all know where that leads. It makes me ask, is there something else going on here? The answer, I believe is yes, and we’ll come back to that in a moment. But first, a little more Greek.

There is a curious thing happening in the Greek. We find a bit of a parallel sentence structure in verses 33 and 34. In verse 33 Jesus says to Peter, get behind me. In verse 34 Jesus says, take your cross and follow me.

The words in Greek that are being used are opsio mou, which means ‘behind me. Jesus says to Peter get behind me and if we pick up our cross and follow Jesus we are behind him. The words opsio mou are used in each sentence. However, in the second instance these words are redundant. Scott Hoezee writes, “The second use of that phrase opiso mou is not necessary in Greek since the Greek verb “to follow” automatically carries with it the sense of “behind me”–it is not necessary to spell it out and so it usually isn’t.”

He continues, “But Mark has Jesus repeat opiso mou as a way to create a parallel to Peter in the previous verse.  Maybe what Mark is saying is that there are two ways to get behind Jesus: if you insist on holding onto this life, of seeking the solution to life’s difficulties by grabbing still more of that same life, then you can get behind Jesus as a satan.

“But if you are willing to let go, to release your fierce grip on your own ego–and on the life you hope will boost and bolster that ego–if you can just die along with Jesus, then you can get behind Jesus as a disciple. Then you can be behind Jesus as a follower who is back there with a clear view of what Jesus does so that you can then imitate him. One way or the other everyone ends up behind Jesus. The question is whether you’ll be back there so you can go where Jesus goes or whether you’ll be back there to be left behind. If you are back there to follow, then even though you first die, you will end up with abundant resurrection life. If you end up back there because you decided to make the goodies of this life your be-all and end-all, then you also will die, but that will be the end of you, too.” (Scott Hoezee)

There are two ways to get behind Jesus. You can actively follow and support the work of the kingdom or not. If you choose not, then that choice also has implications on your life or your soul. Reading this passage out of context we may think that the purpose of Jesus and his disciples, of us following Christ, is to suffer and die. However, when we read it within its wider context, the mission is to give life, knowing we will be opposed. Remember that tidbit I said we’d get back to a moment ago, about life, it being good and provided for by God?

Ira Driggers writes, “When we pan out beyond one or two isolated verses, we find that the overarching narrative offers a simpler, but no less profound, explanation of Jesus’ death: Jesus dies because powerful humans oppose both his healing mission and, more specifically, the disruption that mission brings to established law and order. Unbeknownst to Jesus’ opponents, they are opposing the in-breaking reign (“kingdom”) of God.” (Ira Driggers)

Our purpose in following Jesus isn’t so that we can throw ourselves against the walls and die. It isn’t to get arrested, beaten and executed as Jesus was. The purpose is to allow that part of ourselves that clings to the old order, the order of humanity, injustice and disparity and to be reborn to something new. That something new is the kingdom of God. When we recognize that many of the systems we participate in and which are perpetuated through society are repressive and harmful, then we want to die to those. We want to be reborn as followers of Christ who proclaim a different truth that frees each of us and celebrates the child of God that each of us are. That I believe is something worth dying too. Thanks be to God that we have such a mission and vision to proclaim to the world. Amen.