God’s love is a truely extraordinary thing! It’s true expression to creation is difficult to accurately difuse with words. In our passage from John this morning Jesus talks about why he came and what it means. He makes a curious reference to a passage from the Old Testament which we will also read.

When we put these passages together, what is Jesus telling us about God’s love?

We hope you enjoy the Children’s Story for this week.

Enjoy taking time in the garden this week. We encourage you and your family to interact with the various activities in this week’s Lent Garden. 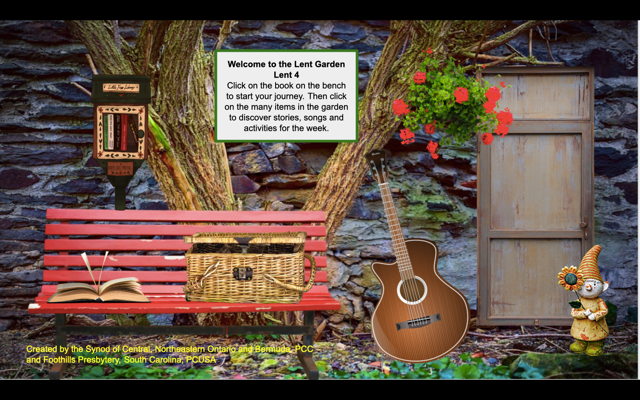 If you research the medical symbol, you will find that it is a snake on a stick. While the medical symbol traces its origins to the Greek story of Asclepius, this is a symbol that is also found in the Judeo-Christian tradition as well.

Our passage from Numbers this morning finds the Israelites grumbling about their long journey through the desert. Their camp is overrun with snakes, the remedy is a bronze snake lifted up on a pole. The serpent is hung for all to see, look to the cause to receive the cure.

Turning to John’s gospel we see that John is making a very clear link between this passage from Numbers and Jesus. “Just as Moses lifted up the snake in the wilderness, so the Son of Man must be lifted up…” Jesus, during a nighttime conversation with Nicodemus, pulls from this passage from Numbers to speak plainly and eloquently about why he has come and what his death signifies.

The implication is that Jesus too will be lifted up on a pole, this time a cross. It is interesting to note that in the Greek, the verb to lift up can also mean to exalt. In the Greek these words would have held a dual meaning.

There are many questions that arise in my mind as a result of this passage.

The first two questions are tied together and the larger question surrounding them is, which one is it? Which takes priority, God’s love or our believing? Which one is the prerequisite for eternity?

In his letter to the Ephesians Paul writes, “By grace you have been saved through faith, and this is not your own doing; it is the gift of God.” (Eph. 2:8) Joseph Small writes, “If we focus on God’s grace, we may be in danger of making salvation an arbitrary act, with no essential place for human response. If we focus on human faith, we may be in danger of making salvation a human accomplishment, restricting God’s initiative…” (Bartlett B. and Brown T. Eds. Joseph Small, Feasting on the Word: Year B, volume 2. 2008, p. 118.)

Bonhoeffer referred to the assumption that God’s grace was freely available and asked nothing in return as ‘cheap grace.’ The idea being that God’s act of grace through Christ should motivate us towards active faith in God. This is demonstrated and lived out when we imitate Christ, caring for the sick, advocating for the poor and speaking out against systems which are destructive and oppressive.

Note how the tone of the passage changes when we discus not whether it is an issue of grace versus faith, but rather an act of trust? God has already made the decision to trust us, by sending Jesus and through the death on the cross. If God can trust us that much, can we also choose to trust God?

Trust requires a level of vulnerability from us. It requires us to be open with ourselves about why we might choose to trust God. It forces us to examine our own barriers. However, I believe that is opens up another important third conversation. Rather than getting stuck about whether God’s grace is a free gift for all or whether it is only available to those who select to receive it, trusting in God encourages us to see how God is active in the world. Trusting in God moves us past receiving Jesus as a personal act of faith and into the larger question of how God is interacting with all of creation.

This leads us back to that third question I had earlier. Reflecting on the passages from Numbers, John and the words Jesus has about his death, what is a hanging Jesus curing us from? In theological terms we are talking about theories of atonement. That is, what happened when Jesus hung on the cross, died and was resurrected from the dead three days later? There are many, many theories on this. Some of them are complementary and others stand in opposition.

In his book Saved from Sacrifice: A Theology of the Cross Mark Heim argues that what Jesus does by dying on the cross is break the cycles of violence and sacrifice that have existed in religious and secular life. Think back to last week’s passage when Jesus cleared the temple. The merchants were selling livestock which was to be used in the temple as an animal sacrifice to God. Jesus clears them out, because he knows that he will be substituted for these other sacrifices. That God will sacrifices gods-self as the ultimate sacrifice and that by being raised from the dead will destroy the cycle of ritual sacrifice and violence that existed.

Jesus is arrested, beaten, and mocked. He suffers mental, emotional and physical violence to his person and is ultimate hung on a cross, lifted up for all to see. His death and the violence he endured is a result of the symptoms which plague humanity. Look to him, exalted on the cross, see the cause of it and be cured.

N.T. Wright puts it like this, “What he [John] is saying, and will continue to say in several ways right up to his account of the crucifixion, is that the evil which was and is in the world, deep-rooted within us all, was somehow allowed to take out is full force on Jesus. When we look at him hanging on the cross, what we are looking at is the result of the evil in which we are all stuck. And we are seeing what God has done about it.” (N.T. Wright, John for Everyone: Part 1, 2002, p. 33)

Through the death of Christ on the cross God is attempting to break this cycle of violence and evilness which exists in humanity. It’s a lesson we haven’t learned, but that doesn’t mean we shouldn’t trust in God. God has shown us a better way, God has acted out of an abundance of grace. We are asked to trust that God wants goodness for us and for others. That we too would work to end the cycles of violence that exist in our world. The ever prevalent violence found in war and conflict, the mental and emotional anguish we are capable of inflicting upon one another and the systems and laws which are oppressive and make it difficult for the most vulnerable in society to flourish.

Can we trust God enough that we might then be courageous enough to be the wave of goodness that this world needs.